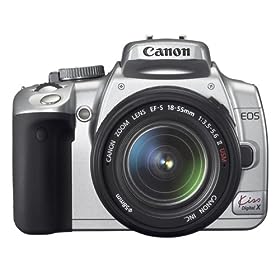 Note: This note was posted the day after the camera was first announced on Aug. 24, 2006. It was also posted at dpreview where it received over 50 comments:
http://forums.dpreview.com/forums/read.asp?forum=1031&message=19738022

The 400D (Europe)/Rebel XTi (USA)/Kiss Digital X (Japan) is on display at Canon showrooms in Japan. I went to the Ginza showroom in Tokyo today and touched the 400D for the first time.

These are my initial impressions:

– The front, top, bottom, sides, and grip of the camera looks almost (or exactly) identical to the previous 350D. But the rear is totally different due to the larger LCD monitor. The feel in your hands is almost the same as with the 350D except for the grippy patch of rubber on the camera back where your right thumb rests.

– The most obvious improvement is the larger LCD monitor which is terrific. The large display is sharp, bright white, and very easy to read. It is much, much easier to read than the 350D’s small, slithery LCD panel. I also really like the ISO speed indicator which is always displayed. You don’t need to press a button to see the current ISO speed setting. And needless to say, viewing your images on a larger screen is also more pleasant than on a smaller screen.

– The LCD monitor turns off automatically whenever some physical object comes near the sensor right below the eyepiece. This works very well and instantaneously. It turns off when you put your eye over the eyepiece so the glare from the monitor does not hinder your view of the viewfinder scene. It also turns off when the camera is hanging down a shoulder strap and touching your side or belly.

– The grip might feel too small or cramped for people used to using a larger camera or people with really large hands. However, I think I can get used to it. I appreciate the smaller size and weight, especially when I need to stuff the camera in an already-full backpack, etc.

– If you have the original 300D and thinking about upgrading, this 400D will be irresistable. One major surprise is the battery size. It’s much smaller/lighter and almost (or exactly) the same size as for the PowerShot compact cameras. It largely explains the camera’s much smaller size than the 300D. It’s also surprising that they could attain this small size even without switching to SD cards.

– The continuous shooting speed is almost the same as the 350D and nowhere as fast as the 30D, but the maximum burst is much improved. I see a lot of people trying to compare the 400D with the 30D. Well, the 30D is obviously a superior camera whose main selling point is higher performance and durability. It reflects the price you pay for it.

– When you turn the camera on and off, a short message appears on the LCD monitor to indicate that the self-cleaning sensor is operating. This feature is a first in the EOS Digital lineup. The big question is if it really works. Well, if it weren’t effective enough, I don’t think Canon would have incorporated it. It was quite ingenious to incorporate both a hardware (ultrasonic vibration of the low-pass filter in front of the sensor) and a software back-up (clone stamp tool to erase mapped dust spots) countermeasure. Any kind of countermeasure against dust on the sensor must be welcomed. If this dust reduction feature is found to be effective by initial users, then I believe that it will be a major selling point for this camera and Canon.

– On sale in Japan from Sept. 8 for around 100,000 yen (including the store’s discount system) with the lens kit. The major camera stores in Japan are already accepting pre-orders. In Japan, the camera is called EOS Kiss Digital X. The “X” is pronounced like the letter X, and not the number 10 although it is named after the 10 megapixels and being the 10th-generation Kiss camera (including the film models).

This is my response to some of the most common reactions in the dpreview forum to the 400D’s specs.

– Don’t take a poll on whether people want to upgrade to the 400D before people can touch and feel the camera (and see the big, beautiful LCD screen) for themselves.

– I can understand 350D users thinking twice about upgrading. It’s really too soon unless you can afford to buy a new camera every 18 months or so. I myself have decided to upgrade with every other camera. I bought the 300D, painfully and regrettably skipped the 350D, but my patience will be rewarded with the 400D. For 350D users, the good news is that the 400D uses the same battery and vertical/battery grip as the 350D. The 400D can use the same accessories as the 350D.

– Not sure about how much battery power the new LCD monitor will require, but you can turn off the LCD monitor with the DISP. button so it stays off. Convenient if you want to really conserve power and not attract attention with a big, bright monitor. But it may be terribly inconvenient not being able to see the current camera settings. Well, just press the DISP. button again to see it, then turn it off again. It’s like using the old Illumination button at night.

– The new LCD monitor reminds me of the iPod when it switched from the ugly-gray liquid-crystal display to the bright and colorful color screen we see today. It will be hard for me to turn it off. And so, before you decide for or against upgrading or purchasing anew, run out to your nearest dealer when it becomes available and see for yourself.

Yes, the grip is very slightly larger than the 350D’s. Thicker by 1mm. There is also a rib on the camera back, besides the rubber patch.

At the Canon showroom, I compared the 350D and 400D side by side, I held both cameras and both felt virtually the same in my hands. However, I’m not a 350D user, so perhaps a 350D user will feel the difference more than me. But a 300D user (like you and me) will probably not feel the difference.

They could not make it too much bigger because they wisely want to keep the camera compatible with 350D accessories (like the vertical grip).

I’m sure Canon went to great lengths to very successfully downsize the camera from the 300D. It was understandable from a marketing point of view. During the time of the 300D, Pentax had a D-SLR which was smaller and lighter (I think the smallest and lightest in the world.). Canon had often made that claim for their previous SLR cameras. And they most likely wanted to reclaim the “lightest and smallest in the world” title (among D-SLRs with interchangeable lenses).

So I don’t think they will want to make the camera significantly bigger than it is now. If you really want a bigger grip, buy a bigger camera. I for one am willing to get used to with the crampiness in exchange for smaller size and weight. My 300D has never felt “heavy” at the end of the day, even after carrying it around all day long under the hot sun or while hiking up hills and mountains. My priority is light weight and small size. I travel a lot, and I carry not only a camera and lenses, but a laptop, AC adapter, portable HD, digital video camera, compact digicam, etc., etc. 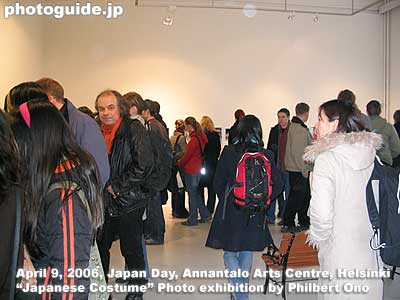 On April 9, 2006, the Annantalo Arts Center in central Helsinki will be holding its annual Japan Day event featuring various Japan-related events and exhibitions. In one exhibition room, I will be showing 25 pictures of Japanese women in Japanese costumes (kimono, etc.) and a short video of Japanese festival movie clips. This is only a day-long event/exhibition.

I won’t be there, but if you’ll be in Finland, please drop by. I hear that the Japanese ambassador to Finland will attend the event as well.

Buying a hard disk in Japan

So I just bought another external hard drive to store my digital photos. It took about a year to fill up my last hard drive, a Buffalo 250GB drive.

I hated that Buffalo 250GB (HD-HB250U2 to be exact, with a USB 2.0 connection http://buffalo.melcoinc.co.jp/products/catalog/item/h/hd-hbu2/index.html ). It was so slow. But it was cheap, less than 20,000 yen. Unfortunately, it took almost forever to copy or transfer images. Transferring a measly 2 GB from my internal hard disk to the Buffalo took over 45 min. Needless to say, it also took a long time to make backup DVDs from the Buffalo too. It was such a pain.

The main reason why I bought it is that in Japan, Buffalo seems to be the most popular HD brand. At Yodobashi, that’s all you see pretty much. The other HD brands are far less visible compared to the stacks and stacks of red Buffalo boxes in front of your face.

So for my new HD, I was determined to get a faster HD. I did some homework and here’s what I found out.

Most hard drives now spin at 7200 rpm which makes it faster than the 5400 rpm of older drives or portable HD models. The rpm is clearly stated on the packaging. But often times what you don’t see on the package (or specs) is the cache memory size. The larger the cache (or buffer) memory, the faster the HD will be when you transfer data to it. The big problem with Buffalo hard drives is that almost all of them don’t say how large the cache is. There’s only one model that says 8 MB cache (but only 250GB). That’s why Buffalo is cheap it seems. So if it doesn’t say how large the cache is, we have to assume that it’s small (and slow).

If you look around, you’ll find other brands which may say 8MB or 16MB cache. But those models are significantly more expensive (maybe 30,000 yen or so). Except for one: Maxtor

Maxtor has 300GB hard drives with 16MB cache costing less than 25,000 yen, hardly any difference in price with the el cheapo Buffalo. So I bought a Maxtor, and wow, it’s fast. I have it connected to FireWire (IEEE1394) and this probably makes a difference too. On paper, USB 2.0 supposed to be faster than FireWire, but during actual use, I’m told that FireWire is faster. So I bought the HD which includes both USB 2.0 and FireWire ports.
http://www.maxtor.co.jp/products/external_storage/onetouch_ii_family/onetouch_ii_combo/index.htm

The one I bought was the Maxtor E30G300. They also have a USB-only model (cheaper) and a Macintosh-formatted model which is significantly more expensive. I use a Mac, but I bought the cheaper Windows version and just formatted it with my Mac. They should sell the Mac version at the same price as the Windows version. I think it was 5,000 yen more. Not worth it when you can easily reformat a Windows HD for your Mac.

The only problem with Maxtor in Japan is that it might be difficult to find. I went to Yodobashi, Tokyo’s largest camera/computer shop, and the Akihabara store did not have the one I wanted in stock. The Kinshicho branch also had none. Finally, they told me that the Ueno and Shinjuku branches had it in stock. So I went to Ueno (only two train stops away from Akihabara) and got it.

Yodobashi has a good online inventory system, so they can tell you which branch has what. If your nearest branch doesn’t have what you want, ask if another branch has it. Then go there and get it.

I think from now on, it will be Maxtor HDs for me. As long as their prices are low, the drives are fast, and it doesn’t crash.