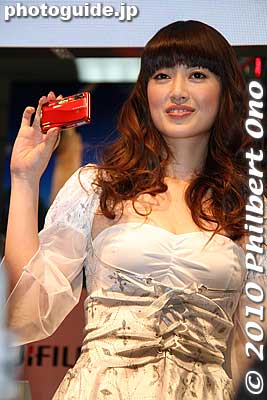 The following is a list of trade shows and events which the photographer may find interesting to attend. Directions to the major venues are listed at the bottom of the page. Remember that if you call or fax from outside Japan, dial the country 81 then the local number without the first zero. For example, for 03-1234-5678, dial 81-3-1234-5678.

CP+ Camera & Photo Imaging Show
Japan’s largest camera show has morphed yet again. This time it’s called CP+ held for the first time in March 2010. And not in Tokyo, but in neighboring Yokohama. This show is mainly for the amateur market. All the major camera makers are present, but very few booths for professionals.

It partially replaces the old Photo Imaging Expo (PIE) which had been held at Tokyo Big Sight. Just when I got used to the name PIE, they created yet another incarnation of Japan’s largest camera show. Instead of the four photography-related organizations which held the old PIE show, CP+ is held by CIPA (Camera & Imaging Products Association).
When & Where: Feb. at Pacifico Yokohama

About CIPA
The Camera & Imaging Products Association (CIPA) is an international organization comprised of companies involved in the production and sale of silver-halide camera and digital camera, imaging-related products, software and more. In addition to product specifications, standards and technical research, CIPA deals with environmental issues and other industry-wide issues and seeks to contribute to the development of photographic and imaging culture.

Terminated: Photo Imaging Expo (PIE)
Held in Tokyo, this was Japan and Asia’s largest photography-related trade show. It started in 2005 when the old Photo Expo for small-format cameras and accessories, the former International Professional Photo Fair (IPPF) for large-format and professional equipment, and the Lab System Show for minilabs were combined into one big show under the same roof during the same dates in March. Up to 2004, these three big trade shows were held on different dates. About 100,000 visitors attended the 4-day PIE at Tokyo Big Sight. 1,000 yen admission. Organized by the Camera and Imaging Products Association, Photo-sensitized Materials Manufacturers’ Association, Japan Colorphoto Finishers’ Association, Japan Photo and Video Accessory Association).

PHOTONEXT
This is Japan’s photo equipment show for pros. The pro section of PIE apparently broke off and started their own trade show in June 2010. The companies who do not show at CP+ usually show up here. Geared for portrait studios, wedding photographers, photofinishers, school portraiture, photo accessory makers, and more. You won’t find big-name camera makers like Canon and Nikon who already showed at CP+ in Yokohama. Organized by Promedia Company, Ltd. and co-organizers:
Photo-Sensitized Materials Manufacturers’ Association
Japan Color-Photo Finishers’ Association (JCFA)
Japan Photo and Video Accessory Association
When & Where: June at Pacifico Yokohama (Venue has changed from 2016)

I.C.S. Camera Fair (Sekai no Chuko Camera Ichi)
For camera collectors and people looking for used cameras, this 6-day fair in Tokyo can’t be beat. A large number of antique and used camera dealers fill glass showcases to show and sell their stuff. It can range from a Kodak Brownie to the rarest Leica. Leica seems to be the most popular brand here, although there are some Nikons and Canons. One booth also sells Japanese and English guide books for camera collectors.
Organized by the Import Camera Society (I.C.S.) (Yu’nyu Camera Kyokai)
Tel: (03) 3832-2331, Fax: (03) 3832-2332., Matsuya Dept. Store Tel: 03-3567-1211
When & Where: Three times a year in Feb. at Matsuya Dept. Store (8th floor) in Ginza, in May in Tokyu Dept. Store Shibuya, and in Oct. at Yurakucho.

Month of Photography, Tokyo (Tokyo Shashin Gekkan)
In Japan, June 1 is designated as Photography Day. It is when various photo-related activities are held. From 1996 in Tokyo, this date was expanded to a full month of events from May to June. It is a highly successful and enjoyable photography event.
During this month of photography, special photo exhibitions at the Tokyo Metropolitan Museum of Photography and major photo galleries, symposiums, and awards ceremonies are held in Tokyo. The Shinjuku Park Tower also displays photos by women photographers, Tokyo. Perhaps the most popular event is the 1000-Person Photo Exhibition held at Yebisu Garden Place (near Ebisu Station). One thousand people from the general public are invited to submit one photograph for display. The Tokyo Metropolitan Museum of Photography issues a pamphlet showing a complete schedule of events and exhibitions. For directions to this museum, see PhotoSpaces or the Museum’s Web site.
Organized by the Photographic Society of Japan (Nihon Shashin Kyokai) with the cooperation of the Tokyo Metropolitan Museum of Photography. Tel: (03) 5276-3585

CEATEC Japan
Asia’s largest trade show for the electronics industry. It features a wide range of electronic goods, from electronic parts for industrial use to consumer electronics. A good place to see the latest digital cameras. The Internet, multimedia, and digital imaging have recently become major themes.
The show was launched in 2000 when the Japan Electronics Show was combined with the COM JAPAN show. CEATEC stands for Combined Exhibition of Advanced Technologies.
Admission is 1,000 yen for adults, 500 yen for students. http://www.ceatec.com
When & Where: October in Tokyo (Makuhari Messe). Click on the above link for more information.

Tokyo International Book Fair
Japanese and overseas publishers gather and show their books, CD-ROMs, and other published materials. The show is geared for bookstore and library managers, but a lot is in store for the general public as well. A large area selling discounted foreign-language books (mainly English) and calendars is a favorite hunting place. Most of the major Japanese book publishers will also sell their titles at a good discount ranging from 20 to 40 percent. This is the only time in Japan when book sellers can sell new books at a discount. Most of the major photo book publishers will also be there, including Heibonsha, Shueisha, and Shogakukan.
Admission charged, but discount coupons are available at major bookstores in Tokyo. Organized by the Executive Committee of TIBF (which includes the Japan Book Publishers Association) and planned by Reed Exhibitions Japan Ltd. Tel: 03-3349-8507, Fax: 03-3344-2400
When & Where: Held at Tokyo Big Sight in July. Click on the above link for details.

Intex Osaka: Near Naka-futo Station on the New Tram Line.