Today, my photographer friend Bruce Osborn will be featured in an online TV program at NHK World called FORWARD -OYAKO Forever-. “Oyako” means parent-child. It will show him photographing families recovering in the disaster-affected areas in Tohoku. The 30-min. program will stream today several times today at the schedule below. It will be in English, Chinese, Spanish, and Arabic. The first stream will start now. http://www.jibtv.com/onair/oa_about.html?n=0

Well-known Japanese photographer Yasuhiro Ishimoto (石元 泰博) passed away in Tokyo on Feb. 6, 2012 due to pneumonia. He was 90 years old. Born in San Francisco, California in 1921, he was a fine-art photographer with ties to both Japan and the US. He was one of the “elder statesmen” of the Japanese photography world.

Parents were Japanese immigrant farmers in the US. Raised in Kochi city, Kochi Prefecture from age three. Studied agriculture in Kochi until 1939. Due to concerns of him being drafted in Japan, his mother urged him to return to America which he did in 1939.

Lived with a farmer and went to Univ. of California in 1940 until being interned at Armach, Colorado when war between Japan and America broke out. Since he had no assets, he did not lose anything unlike other Japanese-Americans who were interned.

He stuck with a group of shutterbugs in the internment camp. After being released in 1944, he went to Chicago after being told that he was free to go anywhere except the coastal cities. Joined a camera club in Chicago.

Studied architecture at Northwestern Univ. in Chicago 1946-48 where he met photographer Harry Shigeta and took up photography seriously. Studied under Harry Callahan and Aaron Siskind at the Institute of Design, Illinois Institute of Technology, Chicago 1948-52 (B.S. degree 1952).

With ties to both Japan and America, Ishimoto gained recognition in both countries. He took an interest in traditional Japanese architecture, starting with photographs of the Katsura Palace in Kyoto. (Katsura was subsequently published by Yale Univ. Press.) His photo book, Chicago, Chicago is another signature work.

He has received numerous awards including Medal with Purple Ribbon and the Order of the Rising Sun, Gold Rays with Rosette. Survived by his nephew Takashi.

In early Jan. 2012, a store in Osaka plastered their shop with large, red posters advertising a sale with the words “Fu**in’ sale.” They were trying to advertise their sale of fukubukuro (lucky bags). A photo of it went viral on Facebook and the Internet.

The shop has taken down the signs and apologized: 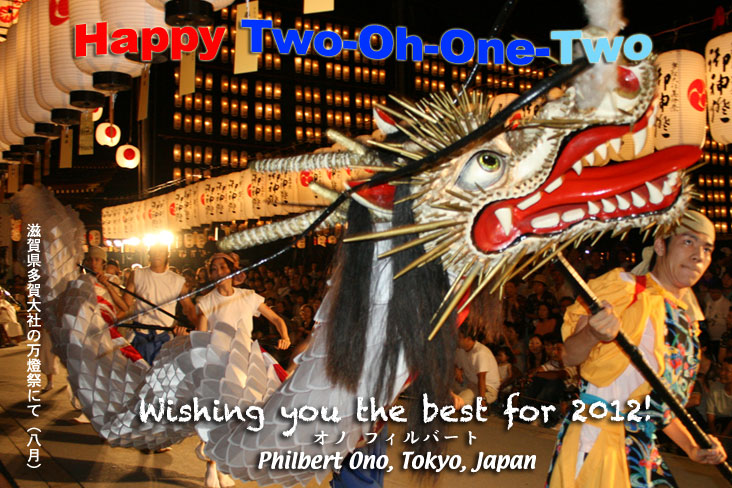 Wishing everyone a happy, safe, and prosperous New Year in 2012! 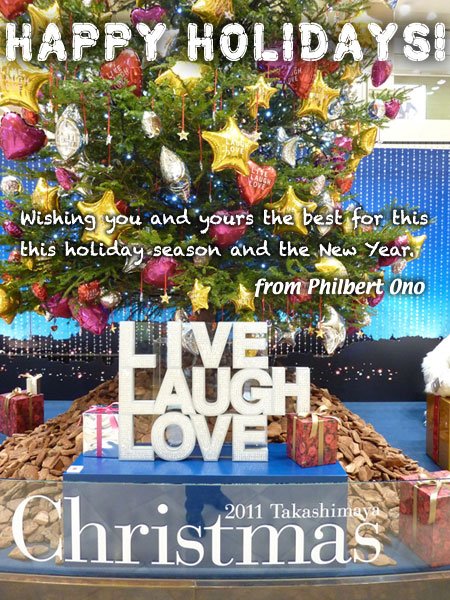 I took this photo inside a department store in Kyoto. It happened to include the three words I live by. Merry Christmas! 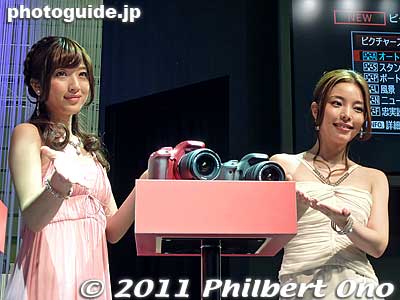 The 3rd CP+ Camera & Photo Imaging Show, Japan’s largest camera show, will be held during Feb. 9-12, 2012 in Yokohama, at Pacifico Yokohama, a large convention complex and the same venue as last year’s CP+. Hopefully, it won’t snow on those days.

Note that the morning of Feb. 9, the show is open to the press only.

Admission is 1,000 yen at the door, but this fee can be waived if you preregister via the CP+ Website.

You can also register to attend free seminars and lectures where they sometimes provide simultaneous Japanese or English translation. The year 2012 is also the 150th anniversary of commercial photography in Japan. Lectures about vintage photography are planned. A special talk by Ellliot Erwitt is also scheduled on Feb. 9.
http://www.cpplus.jp/en/seminar.html

For details, see the show’s official site in English:
http://www.cpplus.jp/en/

CP+ is held by CIPA (Camera & Imaging Products Association). CIPA is an international organization comprised of companies involved in the production and sale of silver-halide camera and digital camera, imaging-related products, software and more. In addition to product specifications, standards and technical research, CIPA deals with environmental issues and other industry-wide issues and seeks to contribute to the development of photographic and imaging culture.
Web site: http://www.cipa.jp/english/

Updated: Our group photo exhibition in Kyoto went very well. It was great meeting people and explaining about our pictures and work. Thank you to all who came to see us.

Photos of the exhibition here:
https://photoguide.jp/pix/thumbnails.php?album=833

Exhibition details:
PhotoGuide Japan organized a group photo exhibition in Kyoto held on Nov. 16-20, 2011 at the Kyoto International Community House in Kyoto, near Keage Station (5 min. by Tozai Line subway from Yamashina Station). The exhibition room was open from noon to 7 pm (till 5:30 pm on the 20th). We had a gathering on Nov. 19 (Sat.) at 5 pm – 7 pm and on Nov. 20 (Sun.) at 4 pm – 5:30 pm when the public was invited to meet the artists. Free admission.

The theme was “Home Sweet Hometown.” Many of us foreigners in Japan have lived here for so long that Japan has become our second hometown. We love our hometowns in Japan so much that we often photograph it. We shared some images of our beloved hometowns. 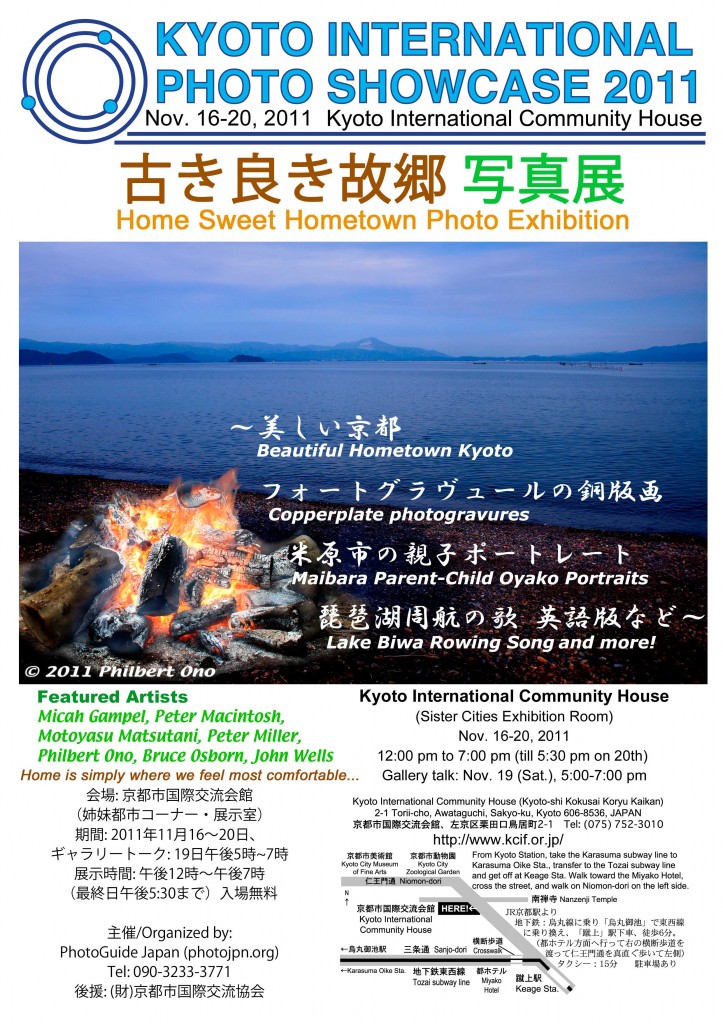 The Japan Times inserted a nice announcement for our show in the Nov. 13, 2011 issue: