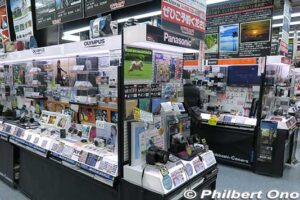 The Japanese camera industry’s struggles have gotten worse with the pandemic in 2020. The coronavirus resulting in stay-at-home requests, travel bans, and the cancellation of events (including the Tokyo 2020 Olympics) give people fewer reasons to take pictures and fewer reasons to buy a new camera. Worldwide camera sales for Jan. to May 2020 is only 50.4% of sales in the same period in 2019.

With the prominence of smartphones, all camera makers have been facing shrinking sales of digital cameras. In 2010, worldwide camera sales peaked at 121.46 million units. In 2019, it shrank to one-eighth the peak with only 15.21 million units.

Even Nikon and Canon are seeing much lower sales in 2020 than ever before. Nikon saw red ink for the first time, for the year ending in March 2020. Sales of its D-SLRs and lenses are not doing well. Although Nikon has greatly trimmed its workforce at its factories in Thailand and Laos, it still expects the red ink to continue until 2021. Their new Nikon D6 flagship D-SLR introduced in May 2020 won’t be enough to put them in the black.

Sony had no fears about mirrorless cameras affecting DSL-R sales since it had no D-SLRs. So it just took the mirrorless camera ball and ran with it all by itself. It has been an amazing run (for the money too). Congratulations to Sony.

Of course, Canon is not standing idly by. It now has the EOS R5 that came out in July 2020. It has been well received as a full-frame mirrorless camera featuring 8K video. The specs exceed Sony’s α9.

Although Sony and Canon have diverse product lines to maintain profitability, Nikon remains on shaky ground. Hopefully, it will survive. A camera industry without Nikon is almost unthinkable.

We have already seen too many mid-tier camera companies disappear or downsize. Ricoh reduced its camera division (which had earlier merged with Pentax) in 2017, and Casio totally withdrew from the compact camera business in May 2018.

The latest shock came on June 24, 2020 when Olympus Corporation announced that it would sell off its historic camera division (founded in 1936) to Japan Industrial Partners, a Japanese investment fund. The final contract will be signed in Sept. 2020 and the sale will be completed by the end of 2020. Olympus will continue as a medical equipment maker.

Another shock was Asahi Camera, one of Japan’s longtime leading camera magazines, ceasing publication with its July 2020 issue. After 94 years in print, this venerable monthly magazine has retired due to declining readership and ad revenue.

Also, in recent years, many authorized camera repair centers in Japan have closed. The major camera makers now have repair centers only in Tokyo or only in the largest cities. People in other areas will need to use mail-in repair services.

As someone who has witnessed the rise and continuing fall of digital cameras, I find all this really sad. But it only reflects the ever-changing times. On the bright side, photography continues to be a massively popular and important activity and photos are essential in our daily lives. More people than ever before are making money from photography. And anybody can take pictures. We’ve come a long, long way since the first camera was brought into Japan.

The COVID-19 pandemic is also hitting Japan’s photo publication industry with Asahi Camera magazine (アサヒカメラ) ceasing publication with its July 2020 issue (on sale on June 19 in Japan) after 94 years in business. It is (or was) Japan’s oldest camera publication since April 1926. (Including a hiatus during World War II in 1942–1949.)

Due to chronically low circulation (averaging 31,500 during spring 2020) and the pandemic drastically shrinking its advertising revenue, the magazine has decided to quit. The many cash-strapped companies in the camera industry no longer have generous advertising budgets. Japan also has many camera/photo magazines all competing for advertisers.

Seemingly in the middle of nowhere, the small town of Tsuwano in Shimane Prefecture turned out to be a real delight. Surrounded by mountains, it feels like a Swiss resort in the Alps. It has traditional buildings and the famous Taikodani Inari Shrine. Very photogenic place easily accessible from JR Tsuwano Station (JR Yamaguchi Line).

Right near the train station is the Shisei Kuwabara Photographics Museum (桑原史成写真美術館) that exhibits photos by documentary photographer Shisei Kuwabara who is from Tsuwano. The museum also houses the local tourist information office. So it should be your first stop when you arrive. Map: https://goo.gl/maps/r8cR2ueCayM2

Shisei Kuwabara (b. 1936) is most famous for his Minamata disease photos (like W. Eugene Smith).

The Shisei Kuwabara Photographics Museum has only one exhibition room, not huge, but it’s large enough. The museum was originally a documentary photo museum and they asked Kuwabara if they could rename it in 2004. So it exhibits mainly his photos, although it does not preserve or possess his photos. So it’s just an exhibition space. The exhibited photos change periodically. Open 9 am–5 pm, closed on the third Thursday in Jan., April, July, and Oct. when they change the exhibit. Admission ¥300 for adults.

Right across the street from the photo museum is an art museum dedicated to another local artist (illustrator) named Mitsumasa Anno. Anno Art Museum (安野光雅美術館) opened in 2001 to show artworks by Mitsumasa Anno who was born and raised in Tsuwano.

The first floor is the main exhibition space of Anno Art Museum. The second floor has an old-style classroom (from 1920s design), planetarium, and library.

After seeing the museums, enter Tono-machi road (殿町通り) lined with traditional buildings. You can enter a few of the buildings like the Japan Heritage Center (small local museum) and the Tsuwano Catholic Church (津和野カトリック教会) dedicated to Saint Francis Xavier who visited Japan as a Christian missionary in 1549–50.

At the end of Tono-machi road, there’s a road going to Taikodani Inari Jinja, one of Japan’s Top Five Inari Shinto shrines noted for many vermillion torii gates along the path to the shrine. This is Tsuwano’s main attraction.

Similar to Fushimi Inari Shrine in Kyoto, Taikodani Inari Shrine has many vermilion torii gates on the way up to the shrine. If you cannot walk up, there is a road for cars that goes to the shrine as well. The path of toriis zigzags up the hill. It’s fun to climb up and enjoy the views.

The shrine worships Uka-no-Mitama, a deity associated with food and agriculture, and the goddess Izanami. It is Shimane Prefecture’s second most popular shrine after Izumo Taisha.

If you’ve come this far, you might as well also see the remains of Tsuwano Castle which is a short hike from the shrine. Or walk to novelist Mori Ogai’s birth home across the river.

To see the main sights of Tsuwano, give yourself at least one full day. You should arrive in Tsuwano and stopover the night before. I loved Tsuwano. Laid back and not crowded. Really worth a visit.